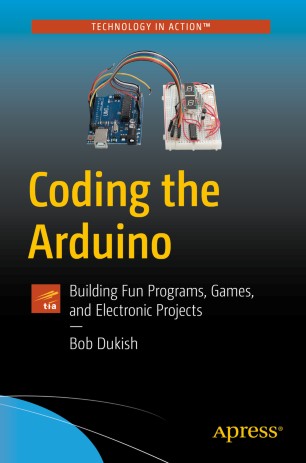 Get started with Arduino and computer coding. This book is intended for those new to the Arduino and computer coding. and looking to gain the skills to write microcontroller programs that can act on given inputs and operate electromechanical output devices.
Coding the Arduino contains four sections: background information, game development, electronic games and projects, and expanded programs. The final chapters expand on the functionality of some of the programs presented in previous chapters, and challenges you with capstone projects.
The projects will be described where the program code that is presented can be modified, or in which two or more of the sample programs may be used to synthesize a new program as the solution to the problem that is presented. Additionally, review questions are presented at the end of each chapter to test your comprehension of the material.

Bob Dukish has been working in the computers and electronics field for over 35 years. He served in the military, worked as an electronic components engineer, holds a number of patents, and taught engineering at both the high school and college levels. He has two Associate Degrees in technology, a Bachelor’s Degree in Physics from Syracuse University, as well as Master’s Degrees from both Kent State University and Rensselaer Polytechnic Institute. His last degree was earned at the age of 54, and he considers himself to be a lifelong learner.