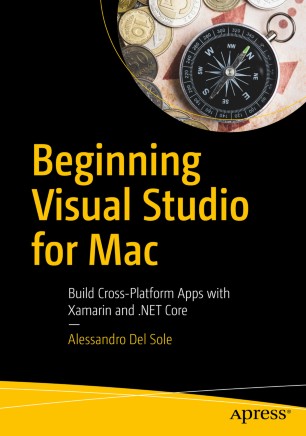 Quickly learn how to get the most out of the Visual Studio for Mac integrated development environment (IDE).

Microsoft has invested heavily to deliver their very best development tools and platforms to other operating systems. Visual Studio for Mac is a powerful developer tool that reinforces Microsoft’s “mobile-first”, “cloud-first”, and “any developer, any platform, any device” strategy. With the author's guided expertise and extensive code samples, you will understand how to leverage the most useful tools in Visual Studio for Mac, the code editor, and the powerful debugger. You also will appreciate the author's guidance on collaborating with other team members using integrated tooling for the Git source control engine.

Whether you are a Mac developer interested in cross-platform development or a Windows developer using a Mac, Beginning Visual Studio for Mac will quickly get you up to speed!

This book is for software developers using a Mac computer who want to build mobile or web applications that run on multiple operating systems.

Alessandro Del Sole has been a Microsoft Most Valuable Professional (MVP) since 2008 and is recognized internationally as a Visual Studio expert and authority on .NET. He has authored many books on programming with Visual Studio and .NET and regularly blogs and writes technical articles on Microsoft developer topics (Italian and English) for sites, including MSDN Magazine and the Visual Basic Developer Center. He is a frequent speaker at Microsoft technical conferences.