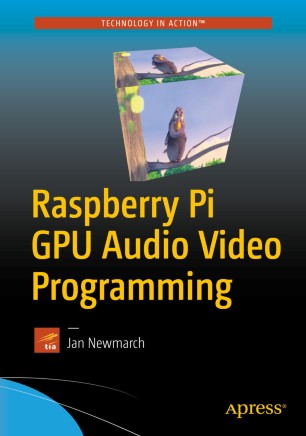 Delve into the Broadcom VideoCore GPU used on the Raspberry Pi and master topics such as OpenGL ES and OpenMAX. Along the way, you’ll also learn some Dispmanx, OpenVG, and GPGPU programming.
The author, Jan Newmarch bumped into a need to do this kind of programming while trying to turn the RPi into a karaoke machine: with the CPU busting its gut rendering MIDI files, there was nothing left for showing images such as karaoke lyrics except for the GPU, and nothing really to tell him how to do it.
Raspberry Pi GPU Audio Video Programming scratches his itch and since he had to learn a lot about RPi GPU programming, he might as well share it with you. What started as a side issue turned into a full-blown project of its own; and this stuff is hard.
What You'll Learn
Who This Book Is For
You should be comfortable with C programming and at least some concurrency and thread programming using it.  This book is for experienced programmers who are new or learning about Raspberry Pi.