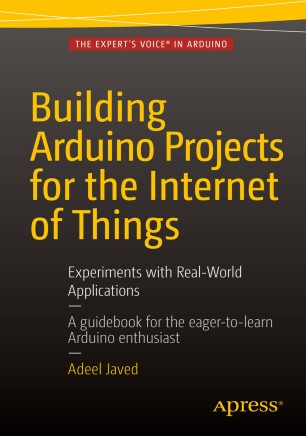 Building Arduino Projects for the Internet of Things

This is a book about building Arduino-powered devices for everyday use, and then connecting those devices to the Internet. Connected devices allow for applications to be built around the connectivity benefits, a trend commonly referred to as The Internet of Things (IoT). The connectivity between devices is where the action lies today.

If you're one of the many who have decided to build your own Arduino-powered devices for IoT applications, you've probably wished you could find a single resource--a guidebook for the eager-to-learn Arduino enthusiast--that teaches logically, methodically, and practically how the Arduino works and what you can build with it.

Building Arduino Projects for the Internet of Things: Experiments with Real-World Applications is exactly what you need. Written by a software developer and solution architect who got tired of hunting and gathering various lessons for Arduino development as he taught himself all about the topic, this book gives you an incredibly strong foundation of Arduino-based device development, from which you can go in any direction according to your specific development needs and desires.Readers are introduced to the building blocks of IoT, and then deploy those principles to by building a variety of useful projects. Projects in the books gradually introduce the reader to key topics such as internet connectivity with Arduino, common IoT protocols, custom web visualization, and Android apps that receive sensor data on-demand and in realtime.IoT device enthusiasts of all ages will want this book by their side when developing Android-based devices.