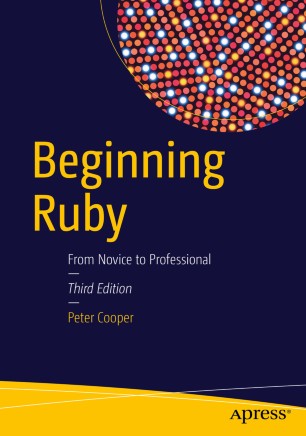 Based on the bestselling first and second editions, Beginning Ruby, Third Edition is a leading guide to learn Ruby from the ground up. The new edition of this book provides the same excellent introduction to Ruby as the previous editions plus updates for the newest version of Ruby 2.3. This book can also be used as a textbook or companion to a textbook on beginning Ruby programming.

The light and agile Ruby programming language remains a very popular open source scripting option for developers building today's web and even some enterprise applications. And, now, Ruby also has applications using the Raspberry Pi, popular among hobbyists and makers. Many former Java developers still use Ruby on Rails today, the most popular framework for building Ruby applications.

Who This Book Is For
Beginning programmers, programmers new to Ruby, and web developers interested in learning and knowing the foundations of the Ruby programming language.

Peter Cooper is an experienced Ruby developer, trainer, and publisher who runs Ruby Inside, the most popular blog in the Ruby and Rails worlds, with 18,000 subscribers. He also curates RubyFlow, a popular Ruby community link blog. Over the past few years he has developed, launched, and sold two startups (Feed Digest and Code Snippets), both powered by Ruby and Rails.

“The material is organized well and reads like a novel. Examples are clear, and accompanied by ample explanations. … Readers in any context in which the Ruby programming language is utilized will find this book an approachable, enabling primer. The book also assists readers by making them aware of the more advanced aspects of the language and its facilities. Summing Up: Highly recommended. All readers.” (F. H. Wild III, Choice, Vol. 54 (7), March, 2017)

“The book gives a well-structured introduction to Ruby from the ground up, starting from installation through main building blocks and advanced features, without assuming any prior programming knowledge and skills. … The text provides an excellent introduction to Ruby, and also has value as a reference source for Ruby developers at various levels.” (Alexander Tzanov, Computing Reviews, December, 2016)
Buy options