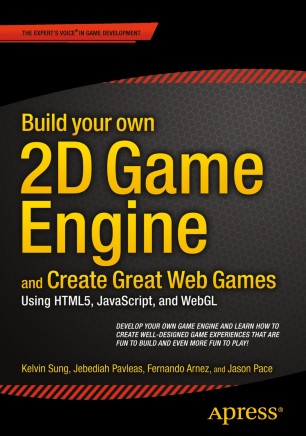 Build Your Own 2D Game Engine and Create Great Web Games teaches you how to develop your own web-based game engine step-by-step, allowing you to create a wide variety of online videogames that can be played in common web browsers. Chapters include examples and projects that gradually increase in complexity while introducing a ground-up design framework, providing you with the foundational concepts needed to build fun and engaging 2D games. By the end of this book you will have created a complete prototype level for a side scrolling action platform game and will be prepared to begin designing additional levels and games of your own.

This book isolates and presents relevant knowledge from software engineering, computer graphics, mathematics, physics, game development, game mechanics, and level design in the context of building a 2D game engine from scratch. The book then derives and analyzes the source code needed to implement th

ese concepts based on HTML5, JavaScript, and WebGL.

After completing the projects you will understand the core-concepts and implementation details of a typical 2D game engine and you will be familiar with a design and prototyping methodology you can use to create game levels and mechanics that are fun and engaging for players. You will gain insights into the many ways software design and creative design must work together to deliver the best game experiences, and you will have access to a versatile 2D game engine that you can expand upon or utilize directly to build your own 2D games that can be played online from anywhere.

Jebediah Pavleas is a graduate student in the Computer Science and Software Engineering program at the University of Washington Bothell (UWB). He received a Bachelor of Science in 2012 and was the recipient of the Chancellor’s Medal for his class. During his time as an undergraduate he took a great interest in both computer graphics and games. His projects included an interactive math application that utilizes Microsoft’s Kinect sensor to teach algebra, a 2D role-playing game designed to teach students introductory programming concepts, and a website where students can compete in various mini-games to control checkpoints around campus. Relating to these projects, he coauthored publications in IEEE Computers and The Journal of Computing Sciences in Colleges (CCSC). When not working towards his graduate degree, he enjoys designing, building, and playing games of all kinds as well as adapting technology for improved accessibility. A university student in computer science, he is interested in working as a game programmer, focusing on accessibility.