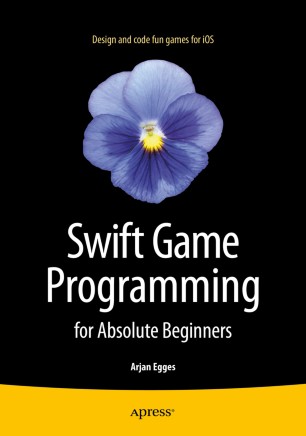 "Concepts of game programming are explained well, and no prior knowledge of Swift language programming is required. ...  The images and audio provided are professional and clean." William Fahle, Computing Review, May 31, 2016

Swift Game Programming for Absolute Beginners teaches Apple’s Swift language in the context of four, fun and colorful games. Learn the Swift 2.0 language, and learn to create game apps for iOS at the same time – a double win!

The four games you’ll develop while reading this book are:

These four games are casual, arcade-style games representing the aim-and-shoot, casual, puzzle, and platform styles of game play. Professionally developed game assets form part of the book download. You’ll get professionally drawn sprites and imagery that’ll have you proud to show your learning to friends and family.

The approach in Swift Game Programming for Absolute Beginners follows the structure of a game rather than the syntax of a language. You’ll learn to create game worlds, manage game objects and game states, define levels for players to pass through, implement animations based upon realistic physics, and much more. Along the way you’ll learn the language, but always in the context of fun and games.