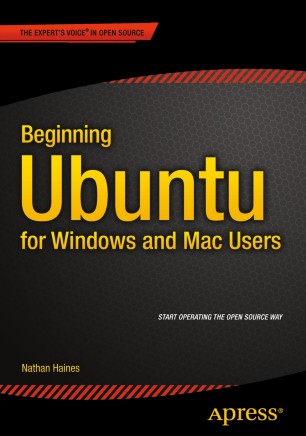 Beginning Ubuntu for Windows and Mac Users is your comprehensive guide to using Ubuntu. You already know how to use a computer running Windows or OS X, but learning a new operating system can feel daunting. If you've been afraid to try Ubuntu because you don't know where to start, this book will show you how to get the most out of Ubuntu for work, home, and play. You'll be introduced to a wide selection of software and settings that will make your computer ready to work for you.

Ubuntu makes your computing life easy. Ubuntu's Software Updater keeps all of your software secure and up-to-date. Browsing the Internet becomes faster and safer. Creating documents and sharing with others is built right in. Enjoying your music and movie libraries helps you unwind. In addition to a tour of Ubuntu's modern and easy-to-use interface, you'll also learn how to:

• Understand the advantages of Ubuntu and its variants—Kubuntu, Xubuntu, and more

Ubuntu is the world’s third most popular operating system and powers desktop and laptop computers, servers, private and public clouds, phones and tablets, and embedded devices. There's never been a better time to install Ubuntu and move to an open source way of life. Get started with Beginning Ubuntu for Windows and Mac Users today!