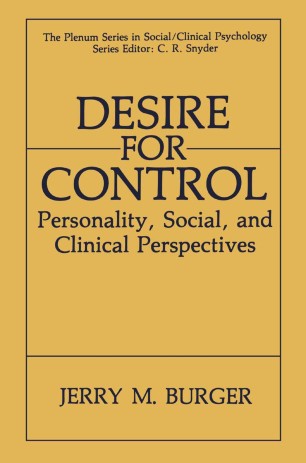 This book is a cumulation of a research program that began in the sum­ mer of 1978, when I was a doctoral student at the University of Missouri. What started as a graduate student' s curiosity about individual differ­ ences in need for personal control led to a personality scale, a few pub­ lications, some additional questions, and additional research. For reasons I no longer recall, I named this personality trait desire for control. One study led to another, and questions by students and colleagues often spurred me to apply desire for control to new areas and new questions. At the same time, researchers around the globe began using the scale and sending me reprints of articles and copies of papers describing work they had done on desire for contro!. In the past decade or so, I have talked or corresponded with dozens of students who have used the scale in their doctoral dissertation and master's thesis research. I have heard of or seen translations of the Desirability of Control Scale into German, Polish, Japanese, and French. There is also a children's version of the scale. I estirnate that there have now been more than a hundred studies conducted on desire for contro!.