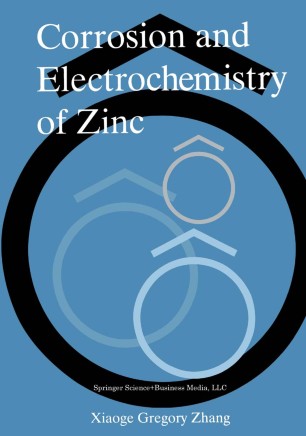 Corrosion and Electrochemistry of Zinc

Humankind's use of zinc stretches back to antiquity, and it was a component in some of the earliest known alloy systems. Even though metallic zinc was not "discovered" in Europe until 1746 (by Marggral), zinc ores were used for making brass in biblical times, and an 87% zinc alloy was found in prehistoric ruins in Transylvania. Also, zinc (the metal) was produced in quantity in India as far back as the thirteenth century, well before it was recognized as being a separate element. The uses of zinc are manifold, ranging from galvanizing to die castings to electronics. It is a preferred anode material in high-energy-density batteries (e.g., Ni/Zn, Ag/Zn, ZnJair), so that its electrochemistry, particularly in alkaline media, has been extensively explored. In the passive state, zinc is photoelectrochemically active, with the passive film displaying n-type characteristics. For the same reason that zinc is considered to be an excellent battery anode, it has found extensive use as a sacrificial anode for the protection of ships and pipelines from corrosion. Indeed, aside from zinc's well-known attributes as an alloying element, its widespread use is principally due to its electrochemical properties, which include a well-placed position in the galvanic series for protecting iron and steel in natural aqueous environments and its reversible dissolution behavior in alkaline solutions.