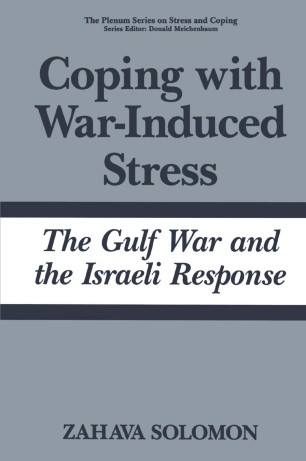 The Gulf War and the Israeli Response

I n the wake of an earlier book (Solomon, 1993), this new work, Coping with War-Induced Stress: The Gulf War and the Israeli Response, promises to make Zahava Solomon a modern maven with respect to the psychologi­ cal effects of war. Dr. Solomon is a high-ranking officer, serving as a psychiatric epidemiologist in the Mental Health Department of the Is­ raeli Defense Forces Medical Corps. She also teaches at Tel Aviv Univer­ sity. The earlier book dealt with the reactions of the Israeli Defense Forces to the 1982 war in Lebanon, which divided the population of Israel concerning its wisdom and justification. The new book deals with the emotional consequences of the United Nations effort against Iraq after its invasion of Kuwait. Because Israel agreed not to participate actively so as not to endanger the fragile Arab coalition against Iraq, it was in a sense a nonwar-as Solomon refers to it-yet with many fea­ tures of a war. Although they had quite limited casualties, largely in the Tel Aviv area, the Israelis faced the actuality of damaging Scud missile attacks and the threat that these missiles could not only be targeted to much of Israel but also carry poison gas to other Israeli cities. Solomon has written a fascinating book about this crisis in Israeli life.