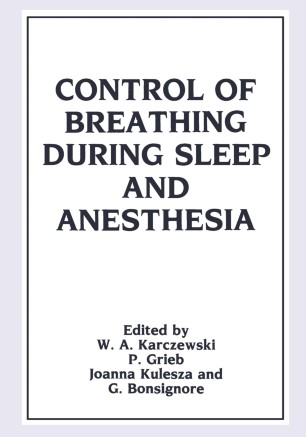 Control of Breathing During Sleep and Anesthesia

Contrary to the popular belief, "Le sommeil n'est plus milieu s(lr" (J. Cocteau, cf. Cl. Gaultier, Pathologie respiratoire du sommeil, La Presse Medicale, 16, 561-563, 1987), and anesthesia is even less safe. Sudden Infant Death Syndrome, Obstructive Sleep Apnea, Ondine's Curse and various respiratory complications of general anesthesia are not so rare; as a matter of fact they happen much too frequently. The idea of organizing another symposium dealing with breathing in sleep and anesthesia has been discussed almost immediately after we said "good bye" to the Organizers of the excellent Paris meeting "The Regulation of Respiration during Sleep and Anesthesia" (R.S. Fitzgerald, H. Gautier, S. Lahiri eds., Advances in Experimental Medicine and Biology, vol. 99, Plenum, New York 1978). Taking into account the impressive amount of data that have emerged during the last few years, we have decided that we shall meet and discuss them; we hoped also that the publication of the scientific material might be useful for everybody interested in the physiology and pathophysiology of breathing, anesthesia and sleep. So we met in Warsaw under the auspices of the European Society for Clinical Respiratory Physiology and the Polish Academy of Sciences, we discussed vividly many fascinating papers presented by our Colleagues from Europe and America and Plenum Press has published the proceedings. I hope that the final result will satisfy the reader.