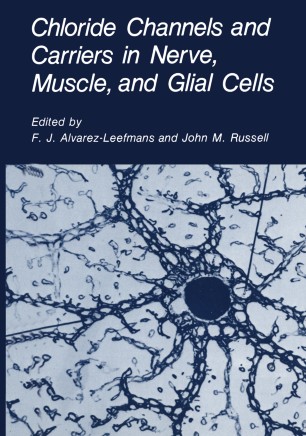 Chloride Channels and Carriers in Nerve, Muscle, and Glial Cells

This is a book about how Cl- crosses the cell membranes of nerve, muscle, and glial cells. Not so very many years ago, a pamphlet rather than book might have resulted from such an endeavor! One might ask why Cl-, the most abundant biological anion, attracted so little attention from investigators. The main reason was that the prevailing paradigm for cellular ion homeostasis in the 1950s and 1960s assigned Cl- a ther­ modynamically passive and unspecialized role. This view was particularly prominent among muscle and neuroscience investigators. In searching for reasons for such a negative (no pun intended) viewpoint, it seems to us that it stemmed from two key experimental observations. First, work on frog skeletal muscle showed that Cl- was passively distributed between the cytoplasm and the extracellular fluid. Second, work on Cl- transport in red blood cells confirmed that the Cl- transmembrane distribution was thermodynamically passive and, in addition, showed that Cl- crossed the mem­ brane extremely rapidly. This latter finding [for a long time interpreted as being the result of a high passive chloride electrical permeability(? CI)] made it quite likely that Cl- would remain at thermodynamic equilibrium. These two observations were gener­ alized and virtually all cells were thought to have a very high P Cl and a ther­ modynamically passive Cl- transmembrane distribution. These concepts can still be found in some physiology and neuroscience textbooks.