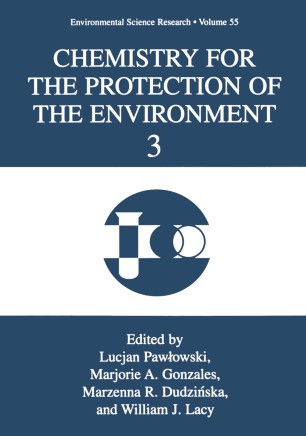 Chemistry for the Protection of the Environment 3

The first meeting in this series was organized by Prof. Pawlowski and Dr. Lacy in 1976 at the Marie Curie-Sklodowska University in Lublin, Poland. The conference dealt with various physicochemical methodologies for water and wastewater treatment research projects that were jointly sponsored by US EP A and Poland. The great interest expressed by the participants led the organizers to expand the scope of the second conference, which was also held in Poland in September 1979. The third and enlarged symposium was again successfully held in 1981 in Lublin, Poland. At that time the participating scientists and engineers expressed their desire to broaden the coverage as well as the title of the conference series. The International Committee, ap­ proved the title "Chemistry for the Protection of the Environment" and designated that date of the fourth conference, CPE IV, which was convened in September 1983 at the Paul Sabatier University in Toulouse, France, and was hosted and arranged by Prof. A. Verdier. This conference series included participants from various government agencies, academia, and the private sector, representing industrialized countries as well as emerging nations, both the East and West in an independent, non politica! forum.