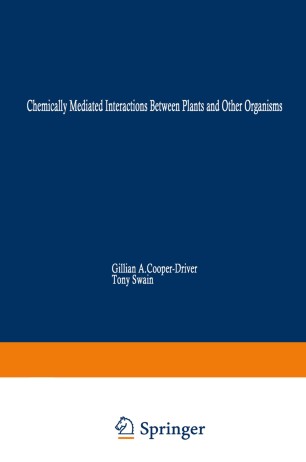 Chemically Mediated Interactions between Plants and Other Organisms

Chemical warfare between plants and their herbivores and pathogens was first brought to our attention by the publication 25 years ago of the paper by Fraenkel in Science. There, he pointed out that most plants have similar nutritional characteristics so that the selection of plants by insect herbivores must depend on the relative toxicity of secondary compounds. This led, rather gradually, to a host of papers on plant-herbivore interactions. More or less at the same time, insect physiologists and ecologists were starting to realise the importance of chemical communi­ cation systems in determining sexual and other characteristics of insect behaviour. Nine years ago the Phytochemical Society of North America published their Symposium on 'Biochemical Interaction Between Plants and Insects' in which the plant apparency theory was expounded by both Paul Feeny and Rex Cates and David Rhoades. This stated that plants which are apparent usually contain secondary components which reduce digestibility (tannins and lignins) while ephemeral plants have more toxic, and perhaps less costly, compounds such as alkaloids. These papers stimulated much research on biochemical ecology. The recognition of the importance of the biochemical factors in such interactions is not just of scientific interest. It is vitally important in programs for the production of new varieties of cultivated plants, especially in tropical countries where about one-third or more of the crops are lost to predation or disease.