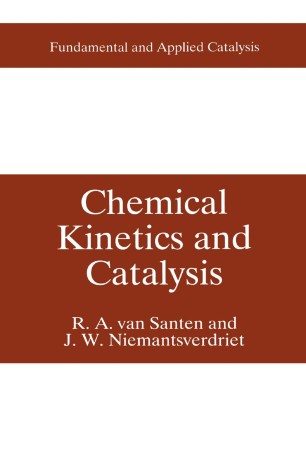 Part of the Fundamental and Applied Catalysis book series (FACA)

to the Fundamental and Applied Catalysis Series Catalysis is important academically and industrially. It plays an essential role in the manufacture of a wide range of products, from gasoline and plastics to fertilizers and herbicides, which would otherwise be unobtainable or prohibitively expensive. There are few chemical-or oil-based material items in modem society that do not depend in some way on a catalytic stage in their manufacture. Apart from manu­ facturing processes, catalysis is finding other important and ever-increasing uses; for example, successful applications of catalysis in the control of pollution and its use in environmental control are certain to increase in the future. The commercial importance of catalysis and the diverse intellectual challenges of catalytic phenomena have stimulated study by a broad spectrum of scientists, including chemists, physicists, chemical engineers, and material scientists. Increas­ ing research activity over the years has brought deeper levels of understanding, and these have been associated with a continually growing amount of published material. As recently as sixty years ago, Rideal and Taylor could still treat the subject comprehensively in a single volume, but by the 1950s Emmett required six volumes, and no conventional multivolume text could now cover the whole of catalysis in any depth. In view of this situation, we felt there was a need for a collection of monographs, each one of which would deal at an advanced level with a selected topic, so as to build a catalysis reference library.