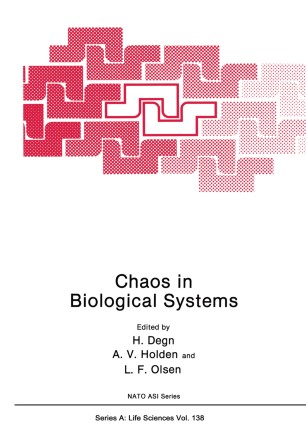 In recent years experimental and numerical studies have shown that chaos is a widespread phenomenon throughout the biological hierarchy ranging from simple enzyme reactions to ecosystems. Although a coherent picture of the fundamental mechanisms responsible for chaotic dynamics has started to appear it is not yet clear what the implications of such dynamics are for biological systems in general. In some systems it appears that chaotic dynamics are associated with a pathological condi­ tion. In other systems the pathological condition has regular periodic dynamics whilst the normal non-pathological condition has chaotic dyna­ mics. Since chaotic behaviour is so ubiquitous in nature and since the phenomenon raises some fundamental questions about its implications for biology it seemed timely to organize an interdisciplinary meeting at which leading scientists could meet to exchange ideas, to evaluate the current state of the field and to stipulate the guidelines along which future research should be directed. The present volume contains the contributions to the NATO Advanced Research Workshop on "Chaos in Biological Systems" held at Dyffryn House, St. Nicholas, Cardiff, U. K. , December 8-12, 1986. At this meeting 38 researchers with highly different backgrounds met to present their latest results through lectures and posters and to discuss the applica­ tions of non-linear techniques to problems of common interest. . In spite of their involvement in the study of chaotic dynamics for several years many of the participants met here for the first time.