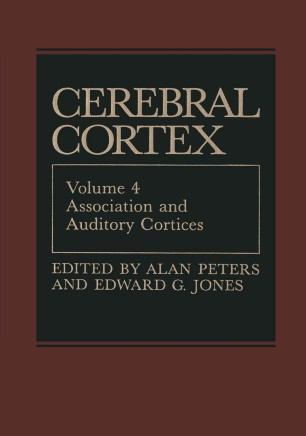 This volume deals with some of the association areas of the cerebral cortex and with the auditory cortex. In the first chapter, by Deepak Pandya and Edward Yeterian, the general architectural features and connections of cortical associ­ ation areas are considered; as these authors point out, in primates the association areas take up a considerable portion of the total cortical surface. Indeed, it is the development of the association areas that accounts for the greatest differ­ ences between the brains of primate and non primate species, and these areas have long been viewed as crucial in the formation of higher cognitive and be­ havioral functions. In the following chapter, Irving Diamond, David Fitzpatrick, and James Sprague consider the question of whether the functions of the as­ sociation areas depend on projections from the sensory areas of the cortex. They use the visual cortex to examine this question and show that there is a great deal of difference between species in the amount of dependence, the differences being paralleled by variations in the manner in which the geniculate and pulvinar nuclei of the thalamus project to the striate and extra striate cortical areas. One of the more interesting and perhaps least understood of the association areas is the cingulate cortex, discussed by Brent Vogt. Cingulate cortex has been linked with emotion and with affective responses to pain, and in his chapter Vogt gives an account of its cytoarchitecture, connections, and functions.