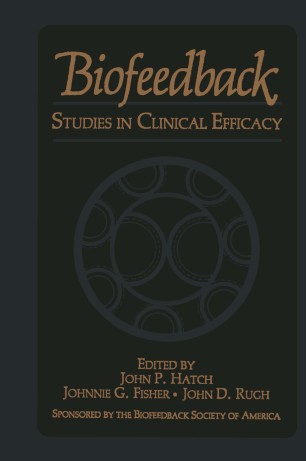 The chapters of this book were prepared as task force reports under the aegis of the Biofeedback Society of America (BSA). The impetus for the present generation of task force reports can be dated back to 1982, when John D. Rugh, as President-Elect of the Society, announced that the updating of the task force reports would be given high priority during his term as President. An ad hoc Task Force Committee was appointed in 1983, and the committee set the following objectives: (1) solicit a widely based stream of input from all segments of the Biofeedback Society of America, (2) establish a peer review system to assure the highest degree of scholarship and an unbiased approach, (3) select for area authors only individuals who have profound knowledge of the area and who have demonstrated the ability to extend understanding by reviewing and criticizing the literature, (4) prepare all reports according to a standard­ ized format, and (5) publish all the reports simultaneously. Input came from several sources. Many people responded with ideas and suggestions to an announcement in the BSA Newsletter that the task force reports were being revised. In 1984, a symposium was conducted at the BSA annual meeting, which included round table dis­ cussions and dialogues between task force report authors and the BSA membership.