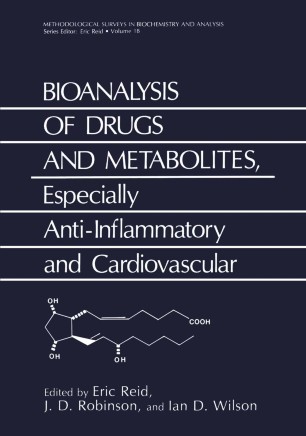 Bioanalysis of Drugs and Metabolites, Especially Anti-Inflammatory and Cardiovascular

Part of the Methodological Surveys in Biochemistry and Analysis book series (MSBA, volume 18 A)

vi as did non-appreciation that % values for bought-in solutions (notably ammonia) may be on a weight basis, not made evident by the manufacturer. Notwithstanding the shortcomings or lateness of some texts, authors are thanked for compiling them amidst other pressures. Elsevier and the American Chemical Society are also thanked, for Figures now reproduced with source acknowledgement. This Editor has generally respected authors' phrasing, whilst shuddering when the term 'incubate' is encountered in a 0° context. He remains a 'diehard' in certain respects, notably in favouring 'M' rather than 'mol/I', and a wt./ml basis for drug concentrations in test samples; he regards 'mmol/l' as a fatuous fashion. Concerning infelicitous abbreviations, a distinction is made between electron­ capture (detector context; 'ECD') and electrochemical ('EC', never 'ECD'); the hallowed GC term 'FID' means free induction decay to NMR practi tione:ts, who may pardon the term 'Fid' as introduced editorially. The convention for ,0C' throughout the book is '0'. Undefined but well-known abbreviations include GC, HPLC and TLC. MS (mass spectrometry), NPD (nitrogen-phosphorus detector), tr (retention time) and RIA (radioimmunoassay) are usually defined in the article concerned, as are the HPLC modes NP (normal-/straight­ phase) and RP (reversed-phase; C-lS and ODS are synonymous), and i.s.