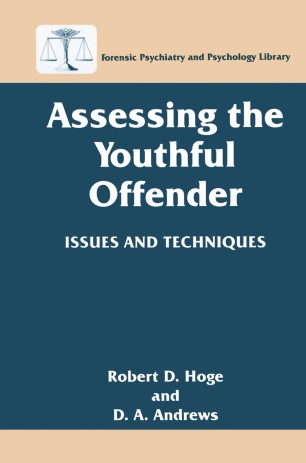 Our society's preoccupation with crime and fear of crime appears to have shifted its focus to the juvenile offender. Both electronic and print media continuously warn us that juvenile offenders are increasingly younger and more virulent. The demographics of our population suggest that there will only be more juvenile offenders to fear in the near future. All of these concerns arise in a social climate that is characterized by an ever­ increasing demand for stronger retributive measures against the offender. The belief that only harsh justice will protect us from the ravages of juveniles has become dominant. Increasingly, perceptions and politics, rather than scientific data, dominate policy making with regard to youthful offenders. In Assessing the Youthful Offender: Issues and Techniques, Robert D. Hoge and D. A. Andrews make a restrained, rational, and ultimately persuasive argu­ ment for the use of standardized psychological assessments in the effective management of youth within juvenile justice systems. They clarify how what we already know about the cause and management of youthful criminal activity can be incorporated into standardized testing and that the information obtained from testing can improve the administration of criminal justice. Moreover, this informa­ tion is useful whatever the theoretical biases of those who administer the justice system. The efficiency of policies of either retribution, deterrence, or rehabilitation is only enhanced by reliance on data.