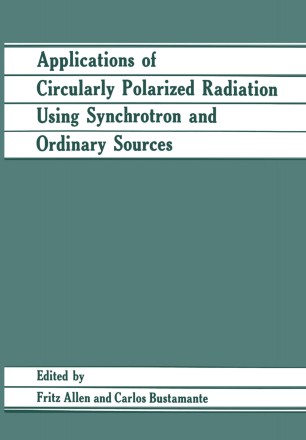 viii The experimental research presented at the conference and reported here deals mainly with the visible wavelength region and slight extensions to either side (roughly from 150 nrn to 1000 nrn, 8. 3 eV to 1. 2 eV). A single exception was that dealing with a description of spin-resolved photoelectron spectroscopy at energies up to 40 eV (31 nm). This work was done using circularly polarized radiation emitted above and below the plane of the circulating electrons in a synchrotron ring. The device at BESSY (West Germany) in which the experiments were carried out seems to be the only one presently capable of providing circularly polarized radiation in the X--ray through vacuum ultraviolet energy range. A much more intense source is needed in this range. A possible solution was proposed which could provide not only circularly polarized photons over a wide energy range, but could in principle modulate the polarization of the beam between two orthogonal polarization states. Realization of this device, or an equivalent one, would be a vital step towards the goal of determining all components of the Mueller matrix for each spectroscopic experiment. A variety of theoretical treatments are presented describing the different phenomena emerging from the interaction of matter and polarized radiation in a wide range of energies. From this work we expect to learn what are the most useful wavelength regions and what types of samples are the most suitable for study.