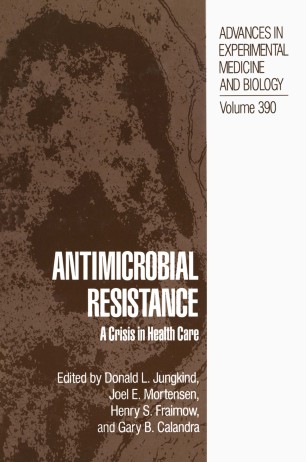 A Crisis in Health Care

Part of the Advances in Experimental Medicine and Biology book series (AEMB, volume 390)

Development and Implications of Antimicrobial Resistance One of the most ominous trends in the field of antimicrobial chemotherapy over the past decade has been the increasing pace of development of antimicrobial resistance among microbial pathogens. The hypothesis that man can discover a magic bullet to always cure a particular infection has proved false. Physicians are now seeing and treating patients for which there are few therapeutic alternatives, and in some cases, none at all. Until recently there was little concern that physicians might be losing the war in our ability to compete with the evolving resistance patterns of microbial pathogens. Now the general public is very aware of the threat to them if they become infected, thanks to cover story articles in major magazines such as Time, Newsweek, newspapers, and other news sources. Antimicrobial resistance is not a novel problem. Shortly after the widespread introduction of penicillin in the early 1940s, the first strains of penicillin-resistant staphylococci were described. Today it is an uncommon event for a clinical laboratory to isolate an S. aureus that is sensitive to penicillin. Other gram-positive strains of bacteria have become resistant, including the exquisitely sensitive Streptococcus pneumoniae. Sensitivity to vancomycin was once so uniform that it was used in routine clinical laboratories as a surrogate marker for whether an organism should be classified as a gram-positive. That criterion can no longer be relied upon because of emerging resistance among some species. Gram-negative bacteria, viruses, fungi, and parasites all have succeeded in developing resistance.