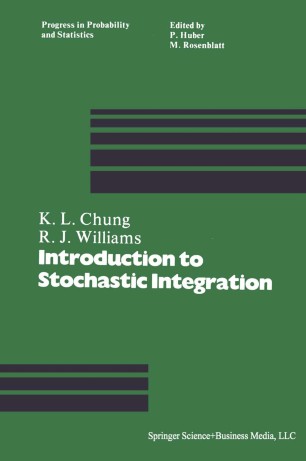 Part of the Progress in Probability and Statistics book series (PRPR, volume 4)

The contents of this monograph approximate the lectures I gave In a graduate course at Stanford University in the first half of 1981. But the material has been thoroughly reorganized and rewritten. The purpose is to present a modern version of the theory of stochastic in­ tegration, comprising but going beyond the classical theory, yet stopping short of the latest discontinuous (and to some distracting) ramifications. Roundly speaking, integration with respect to a local martingale with continuous paths is the primary object of study here. We have decided to include some results requiring only right continuity of paths, in order to illustrate the general methodology. But it is possible for the reader to skip these extensions without feeling lost in a wilderness of generalities. Basic probability theory inclusive of martingales is reviewed in Chapter 1. A suitably prepared reader should begin with Chapter 2 and consult Chapter 1 only when needed. Occasionally theorems are stated without proof but the treatmcnt is aimed at self-containment modulo the in­ evitable prerequisites. With considerable regret I have decided to omit a discussion of stochastic differential equations. Instead, some other ap­ plications of the stochastic calculus are given; in particular Brownian local time is treated in dctail to fill an unapparent gap in the literature. x I PREFACE The applications to storage theory discussed in Section 8. 4 are based on lectures given by J. Michael Harrison in my class.