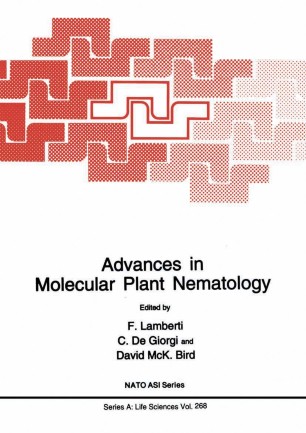 Plant parasitic nematodes are a main pest to crops. For ex am pie, the root-knot nematodes belonging to the genus Meloidogyne are worldwide in their distribution and attack almost every type of crop, causing considerable losses of yield and affecting quality of produce. The cyst nematodes within the genera Globodera and Heterodera constitute a major group of plant pathogens in many countries throughout the world, suppressing yields of potato, sugar beet, soybean and cereals. Several nematodes such as longidorids and trichodorids are implicated in the transmission of numerous plant viruses. Many others cause constraints to agricultural production either locally or on large areas. However, despite their economic importance (they account for worldwide crop reduction in excess of 10%), plant parasitic nematodes are still poorly understood, because most of them are obligate parasites of roots. Environmental concerns over the agricultural use of pesticides demand the development of alternative measures to control them. To achieve environmentally sound control, knowledge of the basic biology of nematodes must be expanded. Important research areas include understanding the molecular bases for pathogenicity, the molecular mechanisms of the host­ parasite interactions and the genetic bases for population fluctuations. The workshop has, for the first time, brought together an international group of researchers using molecular approaches to study plant parasitic nematodes and their host responses.