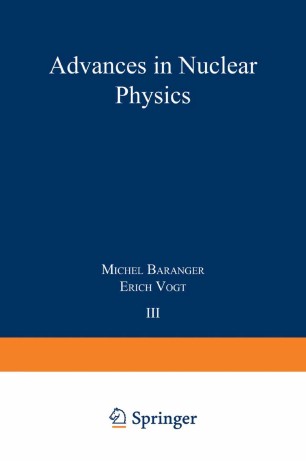 Part of the Advances in Nuclear Physics book series (ANP)

With the appearance of Volume 3 of our series the review articles them­ selves can speak for the nature of the series. Our initial aim of charting the field of nuclear physics with some regularity and completeness is, hopefully, beginning to be established. We are greatly indebted to the willing coopera­ tion of many authors which has kept the series on schedule. By means of the "stream" technique on which our series is based - in which articles emerge from a flow of future articles at the convenience of the authors-the articles appear in this volume without any special coordination of topics. The topics range from the interaction of pions with nuclei to direct reactions in deformed nuclei. There is a great number of additional topics which the series hopes to include. Some of these are indicated by our list of future articles. Some have so far not appeared on our list because the topics have been reviewed re­ cently in other channels. Much of our series has originated from the sug­ gestions of our colleagues. We continue to welcome such aid and we continue to need, particularly, more suggestions about experimentalists who might write articles on experimental topics.