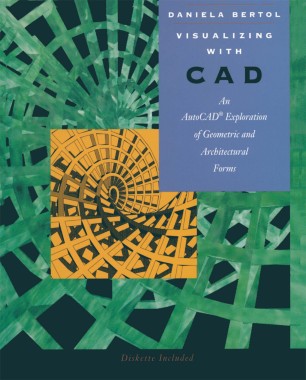 An Auto CAD Exploration of Geometric and Architectural Forms

I spent the first twenty six years of my life in Rome. I used to go for ice cream to a popular place near the Pantheon and I remem­ ber the excitement I felt, beyond the chocolate and whipped cream, when I entered this ancient Roman temple. After staring at the "shower" of light coming from the circular opening at the center of the dome, as strong as a spotlight, I remember being attracted almost hypnotically to the place below the opening. I remember counting the coffers carving the concave dome, com­ posed in five rows of circular arrays, and could feel the power and protection created by the concave space. I also recall going every Sunday to Piazza San Pietro. This Baroque square is well known for its colonnades, which have an oval shape defined by two interlocking circles. For each of these circles there is a mark, located approximately at its center, from which the four aligned rows of columns appear as one. Before entering the church, almost as a part of a ritual, I had to find the mark in the pavement of the oval square. I was amazed by how the rows of columns could appear and disappear according to my position in relation to the mark:.