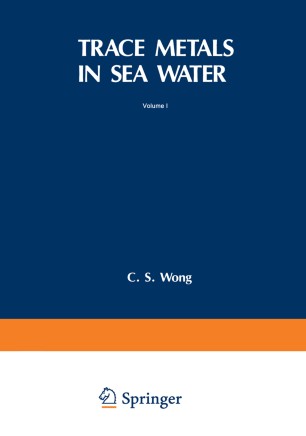 In recent years, rapid scientific advances have been shattering classical concepts of oceanic trace metals concentrations. Most of the data gathered before the mid-1970s have had to be discarded. Possible associations of organic and inorganic ligands with the metals were throwing views of metal speciation into great uncertainty. Biological effects of metals need to be re-examined after recent revelations of unsuspected metal contaminations in methodology. The investigations appear chaotic, yet exciting. It implies that a new order is going to replace the past. Now, an opportunity opens its door to a brave new world for the young generation of scientists to put metal chemistries in the oceans into perspectiveo This N. AoToO. International Conference on "Trace Metals in Sea Water" hoped to catalyze this exciting process of unifying various aspects of trace metals in sea water in future years o The Conference, in the form of an Advanced Research Institute supported by the Scientific Affairs Division of NoAoT. O. supple­ mented by further assistance of the UoS. Office of Naval "Research, was held at the "Ettore Majorana" Center for Scientific Culture in the medieval town of Erice on the island of Sicily, Italy from March 30 to April 3, 1981. It was the first organized gathering of international scientists in this specialized field. Seventy scientists with various expertise in different aspects of the subject were present: including those from NoAoT. Oo countries (Canada, France, F. R. Germany, Greece, Iceland, Italy, U. K.