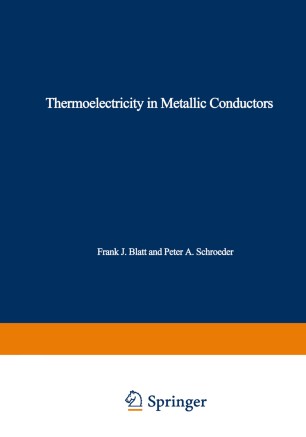 The first International Conference on Thermoelectric Properties of Metallic Conductors was held at Michigan State University on August 10-12, 1977. The conference was sponsored and supported by the National Science Foundation, the Office of Naval Research and the Ford Motor Company. Although the topic may appear, at first glance, rather narrow and of limited interest, it impacts significantly on numerous fields of research, in each instance providing a unique and fru- ful technique for securing important data that is frequently difficult to obtain by other means. Thus, though thermoelectricity is the thread that binds these pages together, the papers constitute a patchwork quilt that includes critical phenomena, superconductivity, many-body theory, quasi one-dimensional systems, liquid metals, to mention only a few. This volume contains the 12 invited and 31 contributed papers, arranged in the order in which they were presented, as well as much of the frequently spirited and always illuminating discussion that followed these papers. Regrettably, not all of the discussion is included. Difficulties with the recording system during the first session (Wednesday morning) did not become apparent before the end of that session, and, consequently, none of the discussion--some of it fairly heated--appears in the proceedings; other remarks were lost to posterity through occasional malfunctioning of the record­ ing facilities and/or failure of speakers to come near a microphone.