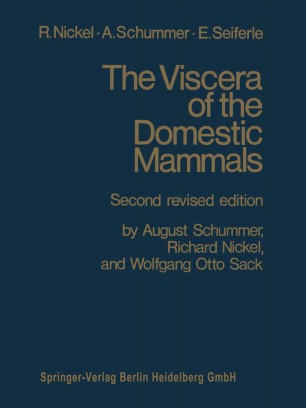 The Viscera of the Domestic Mammals

VIII equally to this first English edition. The work deals with the body cavities, digestive system and teeth, spleen, and with the respiratory and urogenital systems of the dog, cat, pig, ox, sheep, goat, and horse. Each organ system is described in a general and comparative chapter, which is followed by shorter special chapters for the carnivores, pig, ruminants, and horse. In agreement with the original authors, substantive changes were made in several instances to take into account the results of recent research and to eliminate conflicts between views commonly held by German anatomists and those outside of Europe, but foremost to profit by the advances in Nomina anatomica veterinaria* (NAV), a uniform international nomenclature, which came into existence while this translation was in progress. This nomenclature lists a single, usually descriptive term for homologous structures in all domestic mammals, and wherever possible for the same structure in man; and thus has the potential of simplifying student instruction and promoting interdisciplinary understanding. The work of the International Committee on Veterinary Anatomical Nomenclature in many instances included re-evaluations of existing anatomical concepts; and it was these that necessitated most of the changes in the present work. The nomenclature conforms, with very few exceptions, to the second edition of the NA V.