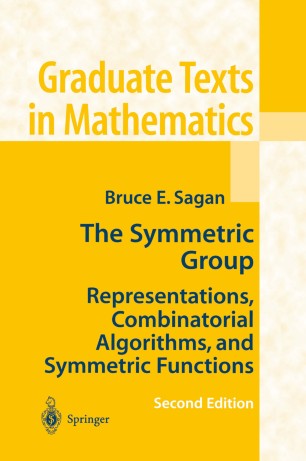 I have been very gratified by the response to the first edition, which has resulted in it being sold out. This put some pressure on me to come out with a second edition and now, finally, here it is. The original text has stayed much the same, the major change being in the treatment of the hook formula which is now based on the beautiful Novelli-Pak-Stoyanovskii bijection (NPS 97]. I have also added a chapter on applications of the material from the first edition. This includes Stanley's theory of differential posets (Stn 88, Stn 90] and Fomin's related concept of growths (Fom 86, Fom 94, Fom 95], which extends some of the combinatorics of Sn-representations. Next come a couple of sections showing how groups acting on posets give rise to interesting representations that can be used to prove unimodality results (Stn 82]. Finally, we discuss Stanley's symmetric function analogue of the chromatic polynomial of a graph (Stn 95, Stn ta]. I would like to thank all the people, too numerous to mention, who pointed out typos in the first edition. My computer has been severely reprimanded for making them. Thanks also go to Christian Krattenthaler, Tom Roby, and Richard Stanley, all of whom read portions of the new material and gave me their comments. Finally, I would like to give my heartfelt thanks to my editor at Springer, Ina Lindemann, who has been very supportive and helpful through various difficult times.