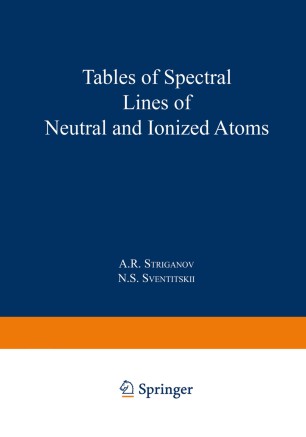 Tables of Spectral Lines of Neutral and Ionized Atoms

Tables of Spectral Lines of Neutral and Ionized Atoms was first published in Moscow in 1966. All misprints and errors that have come to our attention have been corrected, and additions based on journal articles have been made for the Plenum Press edition. In particular, additions have been made in the tables for Li (4], C I [1], N I (1], N IV [12], and N V [14]. Such highly important spectra as those of N IV, NV, 0 IV, 0 V, and 0 VI in the visible and partially in the ultraviolet regions have, until recently, re­ ceived almost no attention in the laboratory. The tables of these spectra in­ clude astrophysical data from B. Edlen (Z. Astrophys. , 7:378, 1933) and C. E. Moore (A Multiplet Table of Astrophysical Interest, Part I, N. B. S. , 1945) with rather rough estimates of the wavelengths of the spectral lines. But as the spectra of highly ionized atoms have been studied in the laboratory, these values have been determined more precisely, and we have striven to incorporate them in the American edition of the book. For the spectra of N IV and NV, we have employed the recent, comprehensive papers of R. Hallin (Arkiv for Fysik, 32:201, 1966; 31:511, 1966), in which the system of energy levels was refined and expanded, and many classified lines in the visible, ordinary ultra­ violet, and vacuum ultraviolet regions are cited.