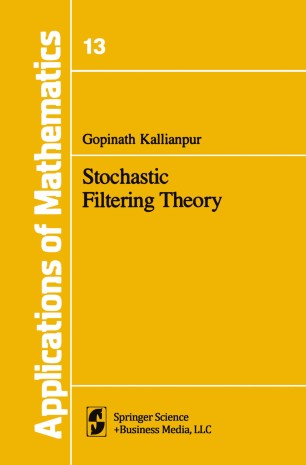 This book is based on a seminar given at the University of California at Los Angeles in the Spring of 1975. The choice of topics reflects my interests at the time and the needs of the students taking the course. Initially the lectures were written up for publication in the Lecture Notes series. How­ ever, when I accepted Professor A. V. Balakrishnan's invitation to publish them in the Springer series on Applications of Mathematics it became necessary to alter the informal and often abridged style of the notes and to rewrite or expand much of the original manuscript so as to make the book as self-contained as possible. Even so, no attempt has been made to write a comprehensive treatise on filtering theory, and the book still follows the original plan of the lectures. While this book was in preparation, the two-volume English translation of the work by R. S. Liptser and A. N. Shiryaev has appeared in this series. The first volume and the present book have the same approach to the sub­ ject, viz. that of martingale theory. Liptser and Shiryaev go into greater detail in the discussion of statistical applications and also consider inter­ polation and extrapolation as well as filtering.