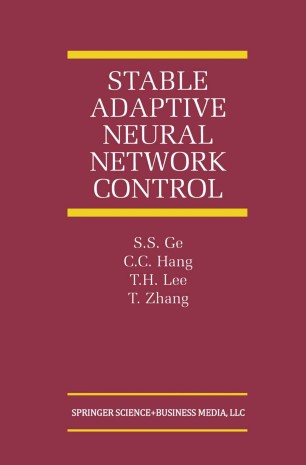 Part of the The Springer International Series on Asian Studies in Computer and Information Science book series (ASIS, volume 13)

Recent years have seen a rapid development of neural network control tech­ niques and their successful applications. Numerous simulation studies and actual industrial implementations show that artificial neural network is a good candidate for function approximation and control system design in solving the control problems of complex nonlinear systems in the presence of different kinds of uncertainties. Many control approaches/methods, reporting inventions and control applications within the fields of adaptive control, neural control and fuzzy systems, have been published in various books, journals and conference proceedings. In spite of these remarkable advances in neural control field, due to the complexity of nonlinear systems, the present research on adaptive neural control is still focused on the development of fundamental methodologies. From a theoretical viewpoint, there is, in general, lack of a firmly mathematical basis in stability, robustness, and performance analysis of neural network adaptive control systems. This book is motivated by the need for systematic design approaches for stable adaptive control using approximation-based techniques. The main objec­ tives of the book are to develop stable adaptive neural control strategies, and to perform transient performance analysis of the resulted neural control systems analytically. Other linear-in-the-parameter function approximators can replace the linear-in-the-parameter neural networks in the controllers presented in the book without any difficulty, which include polynomials, splines, fuzzy systems, wavelet networks, among others. Stability is one of the most important issues being concerned if an adaptive neural network controller is to be used in practical applications.