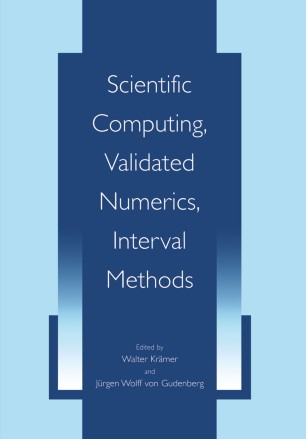 Scan 2000, the GAMM - IMACS International Symposium on Scientific Computing, Computer Arithmetic, and Validated Numerics and Interval 2000, the International Conference on Interval Methods in Science and Engineering were jointly held in Karlsruhe, September 19-22, 2000. The joint conference continued the series of 7 previous Scan-symposia under the joint sponsorship of GAMM and IMACS. These conferences have traditionally covered the numerical and algorithmic aspects of scientific computing, with a strong emphasis on validation and verification of computed results as well as on arithmetic, programming, and algorithmic tools for this purpose. The conference further continued the series of 4 former Interval conferences focusing on interval methods and their application in science and engineering. The objectives are to propagate current applications and research as well as to promote a greater understanding and increased awareness of the subject matters. The symposium was held in Karlsruhe the European cradle of interval arithmetic and self-validating numerics and attracted 193 researchers from 33 countries. 12 invited and 153 contributed talks were given. But not only the quantity was overwhelming we were deeply impressed by the emerging maturity of our discipline. There were many talks discussing a wide variety of serious applications stretching all parts of mathematical modelling. New efficient, publicly available or even commercial tools were proposed or presented, and also foundations of the theory of intervals and reliable computations were considerably strengthened.