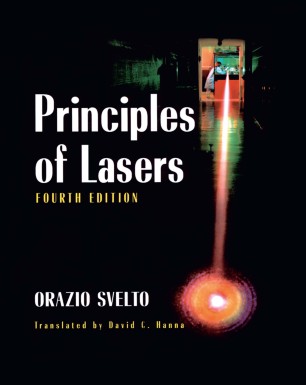 This book is motivated by the very favorable reception given to the previous editions as well as by the considerable range of new developments in the laser field since the publication of the third edition in 1989. These new developments include, among others, quantum-well and muitiple-quantum-welliasers, diode-pumped solid-state lasers, new concepts for both stable and unstable resonators, femtosecond lasers, ultra-high-brightness lasers, etc. This edition thus represents a radically revised version of the preceding edition, amounting essentially to a new book in its own right. However, the basic aim has remained the same, namely to provide a broad and unified description of laser behavior at the simplest level which is compatible with a correct physical understanding. The book is therefore intended as a textbook for a senior-level or first-year graduate course and/or as a reference book. The most relevant additions or changes to this edition can be summarized as follows: 1. A much-more detailed description of Amplified Spontaneous Emission has been given (Chapter 2) and a novel simplified treatment of this phenomenon, both for homogeneous and inhomogeneous lines, has been introduced (Appendix C). 2. A major fraction of a new chapter (Chapter 3) is dedicated to the interaction of radiation with semiconductor media, either in a bulk form or in a quantum-confined structure (quantum-well, quantum-wire and quantum dot). 3.