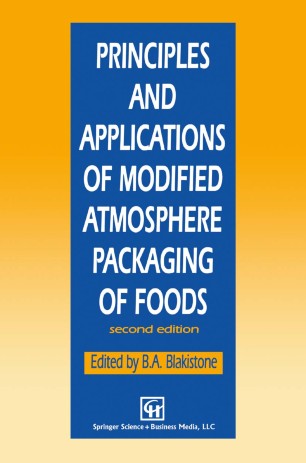 Principles and Applications of Modified Atmosphere Packaging of Foods

Modified atmosphere packaging may be defined as an active packaging method in which an altered atmosphere is created in the headspace that retards chemical deterioration while simultaneously retarding growth of spoilage organisms. Shelf lives of perishable products, such as dairy products, meat, poultry, fish, fruits and vegetables, and bakery items are limited by biochemical changes in the product catalysed by exposure to the normal atmosphere (21 % oxygen, 78% nitrogen and less than 0. 1 % carbon dioxide) and growth of spoilage organisms. Modification of the atmosphere within a package containing these products helps to better maintain the quality of the food under longer storage conditions and retards the growth of undesirable organisms. Of course, deterioration is also slowed by chilling, which is required for the transport to market of highly perishable items like meat, poultry and fish that would either spoil or have the potential for contamination by certain food pathogens. Chilling plus a modification of the atmosphere optimizes the keeping quality of food. Modification of the atmosphere has been known for over a century as a means of food preservation and has become a very popular means of food preservation in the latter part of the 20th century. Modified atmosphere packaging (MAP) is practised extensively in Europe, Canada and the USo Both vacuum packaging (rem oval of air from the package) and addition of gases within the package are considered MAP.