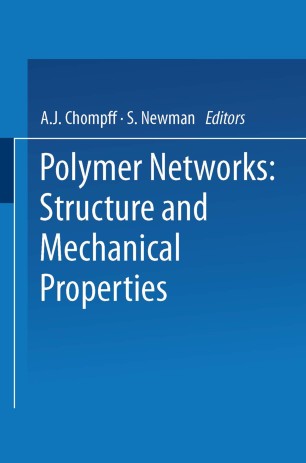 For several decades, polymer science has sought to rationalize the mechanical and thermodynamic properties of polymer networks largely within the framework of statistical thermodynamics. Much of this effort has been directed toward the rubbery rather than the glassy state. It is generally assumed that networks possess an av­ erage composition to which average properties may be assigned; from such a continuum view, a powerful analysis of such properties as modulus, swelling, birefringence and thermoelasticity has emerged. In the years following the rise of polymer characterization (the late 40's and early 50's), many scientists began to study ap­ parent relations between the properties of linear polymer molecules and the networks obtainable therefrom. This search was also stimu­ lated by the wide range of applications of polymer networks in com­ mercial elastomers, thermosets and coatings. Frequently, these data were confidently matched with curves obtained from statisti­ cally describable models of networks of ghost chains, uniformly distributed in space. More recently, it has become apparent that polymer chains in networks are not as ideal as assumed in the formulation of statis­ tical models, and there has been a shift in emphasis towards the less than ideal, perturbed and possibly inhomogeneous networks which are more frequently encountered in practice. The continuum approach, however, had to be developed before inhomogeneous systems could be described; the present volume, therefore, contains both views.