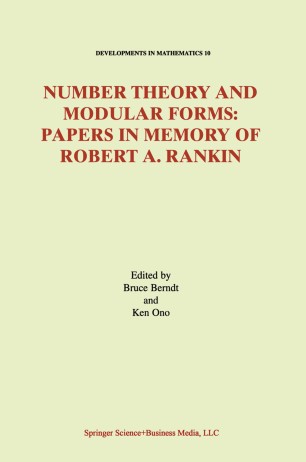 Papers in Memory of Robert A. Rankin

Part of the Developments in Mathematics book series (DEVM, volume 10)

Robert A. Rankin, one of the world's foremost authorities on modular forms and a founding editor of The Ramanujan Journal, died on January 27, 2001, at the age of 85. Rankin had broad interests and contributed fundamental papers in a wide variety of areas within number theory, geometry, analysis, and algebra. To commemorate Rankin's life and work, the editors have collected together 25 papers by several eminent mathematicians reflecting Rankin's extensive range of interests within number theory. Many of these papers reflect Rankin's primary focus in modular forms. It is the editors' fervent hope that mathematicians will be stimulated by these papers and gain a greater appreciation for Rankin's contributions to mathematics.
This volume would be an inspiration to students and researchers in the areas of number theory and modular forms.