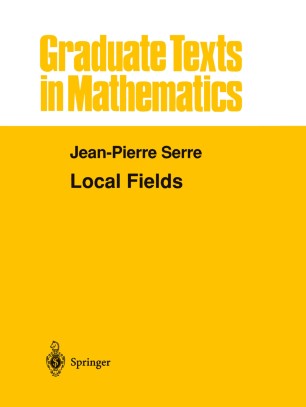 The goal of this book is to present local class field theory from the cohomo­ logical point of view, following the method inaugurated by Hochschild and developed by Artin-Tate. This theory is about extensions-primarily abelian-of "local" (i.e., complete for a discrete valuation) fields with finite residue field. For example, such fields are obtained by completing an algebraic number field; that is one of the aspects of "localisation". The chapters are grouped in "parts". There are three preliminary parts: the first two on the general theory of local fields, the third on group coho­ mology. Local class field theory, strictly speaking, does not appear until the fourth part. Here is a more precise outline of the contents of these four parts: The first contains basic definitions and results on discrete valuation rings, Dedekind domains (which are their "globalisation") and the completion process. The prerequisite for this part is a knowledge of elementary notions of algebra and topology, which may be found for instance in Bourbaki. The second part is concerned with ramification phenomena (different, discriminant, ramification groups, Artin representation). Just as in the first part, no assumptions are made here about the residue fields. It is in this setting that the "norm" map is studied; I have expressed the results in terms of "additive polynomials" and of "multiplicative polynomials", since using the language of algebraic geometry would have led me too far astray.