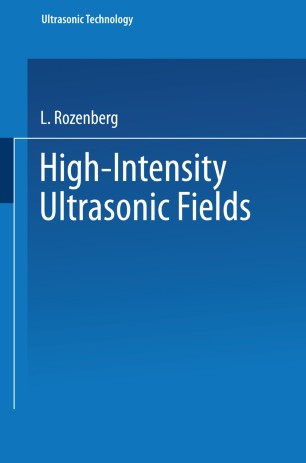 vi tute of the Academy of Sciences of the USSR. Thus, the book does not contain material on the nonlinear interaction of nonlinear ab­ sorption of high-intensity acoustic oscillations in solids, etc. Al­ though the main body of the text generally encompasses the results of the author of the given part of the book, the materials of other Soviet and foreign researchers working in the particular field are also incorporated in the interest of clarity and completeness. Part I presents a survey of the results of investigations con­ ducted by the author in the nonlinear absorption of,sound in liquids and gases. Of special interest are the effects on nonlinear ab­ sorption in convergent and divergent cylindrical and spherical fronts. Part n is based on results obtained by the author largely during his tenure at the Acoustics Institute. It is given over to the rather complex and beguiling problem of the radiation pressure, an area that is often imprecisely and at times incorrectly handled. Part lli comprises a survey of our knowledge concerning acoustic streaming. Even though the advances made in this area at the Acoustics Institute are relatively limited, the subject is still important enough to warrant its inclusion as an independent part of the book.