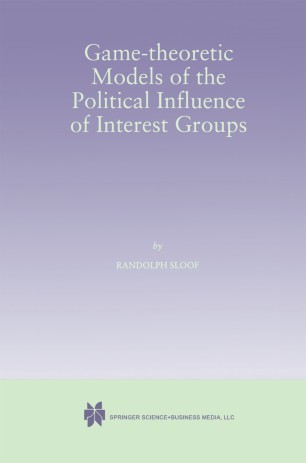 Game-theoretic Models of the Political Influence of Interest Groups

In this chapter the topic of this book is introduced. Section 1. 1 provides a brief and rather general motivation for the scientific project undertaken here. Interest groups are a very popular object of scientific inquiry, and they received already considerable research attention from scholars in political science, as well as from researchers in economics. Necessarily, then, this book adds to a literature which is already quite developed. A detailed positioning in this literature of the theoretical material presented in this monograph will be given in Chapter 2. This second chapter will also, by means of a review of the empirical literature, provide a more general overview of the issues deemed to be important when studying the influence of interest groups on public policy. The outline of the entire book is described in greater detail in Section 1. 2. As most issues involved are more easily presented in later chapters, this introductory chapter is kept brief. 1. 1 MOTIVATION Substantial political power is often attributed to interest groups. Examples abound in both the economics and political science literature, as well as in journalistic accounts and popular publications. On many occasions the authors express concerns about the negative impact of interest groups on the democratic quality of government. "The interests of a small group are served at the expense of the interests of the general public, the taxpayers!", is an often heard popular complaint.