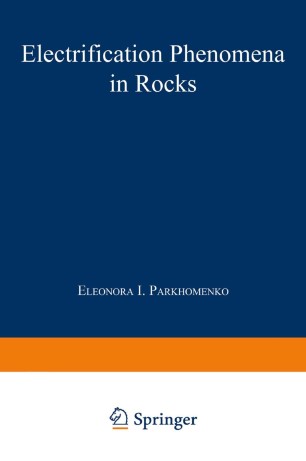 Part of the Monographs in Geoscience book series (MOGEO)

In many areas of geophysics, geology, geochemistry, and mining, there is considerable interest in laboratory data on the physical properties of various types of rocks. Until recently, how­ ever, only the mechanical properties of rocks had been studied in detail. The last few years have seen a relatively large amount of study of the electrical properties of rock samples and a need to organize the results of these studies has arisen. In"Electrical Properties of Rocks,"* E. 1. Parkhomenko reviewed and cataloged studies of electrical resistivity and the dielectric constant in rocks. In the present work she covers other electrical phenomena which are observed to occur in rocks and minerals and reviews the re­ sults of her own researches, as well as that of others, previously published. Theoretical and experimental data on the piezoelectric prop­ erties of minerals and rocks obtained since 1953 by E. 1. Parkho­ menko and myself as the result of laboratory investigations on quartz-bearing rocks (granite, gneiss, quartz veins, etc. ) comprise the bulk of the monograph (Chapters1-4). Itwas not previously con­ sidered that a polycrystalline mass such as a rock could exhibit piezoelectric properties - it was supposed characteristic only of single crystals.