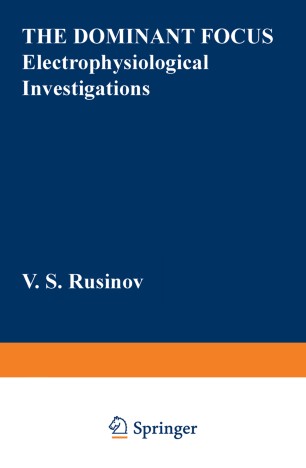 This book describes an electrophysiological investigation of foci of excitation in the central nervous system of animals and man, foci which become dominant in character. The dominant focus, or dominant as it is usually called by Russian physiologists, is one of the fundamental processes under­ lying the activity of the central nervous system. The discovery of the mechanisms of formation of dominant foci is important for a deeper understanding of the activity of the human and animal brain and for identifying the pathophysiological mechanisms in lesions of the nervous system. The book summarizes the results of many years of investiga­ tion, both experimental and clinical, into the nature and properties of foci of excitation arising at different levels of the central ner­ vous system. A brief survey of the literature on Ukhtomskii's theory of the dominant is given in Chapter I and the present state of this theory is reviewed. The other chapters of the book deal with the results of research in the field of dominant foci undertaken in the author's laboratory. The experimental data relating to changes in the level of the steady cortical potential during the formation of the dominant focus and conditioned reflex are examined. The results obtained by polarization of the cortex with a weak direct current in order to form a dominant focus, and also by polarization of the reticular system of the brain stem and speCific and nonspecific nuclei of the thalamus and hypothalamus are given.