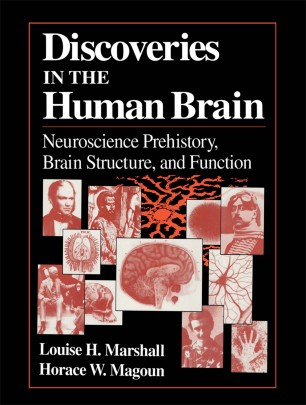 Discoveries in the Human Brain

In Discoveries in the Human Brain Louise Marshall and Horace Magoun capture the grand sweep of human brain history leading to the emergence of modern neuroscience as a multidisciplinary field incorporating anatomical, behavioral, cellular, and medical knowledge. The book chronicles-from the time of early humans to the 1980s-the many significant people and events that gradually produced today's understanding of brain anatomy and physiology. Enlightening and engrossing throughout, Dr. Marshall's survey traces this unfolding story from the first findings of gross neuroanatomy in the ancient world to today's functional analysis of the electrophysiology of nerve impulses; from early discoveries of the existence and operations the central nervous system to, finally, the developments in brain chemistry and pharmacology that have now brought us to neural networks and brain modeling. Throughout there are numerous historic and rare plates, a rich tapestry of quotations from primary sources, and concise summaries of the pathbreaking research that shaped and determined modern neuroscience.

Discoveries in the Human Brain illuminates for neuroscientists, neurologists, historians of medicine and science, as well as the educated reader all the major landmarks in the development of neuroscience and its various subdisciplines, ranging from anatomy, chemistry, and physiology, to biomathematics, biophysics, psychobiology, and physiological psychology. It will prove indispensable reading for everyone wanting to understand the evolution of neuroscience and the broad interdisciplinary foundation on which our knowledge of mind-brain relations and human consciousness rests.