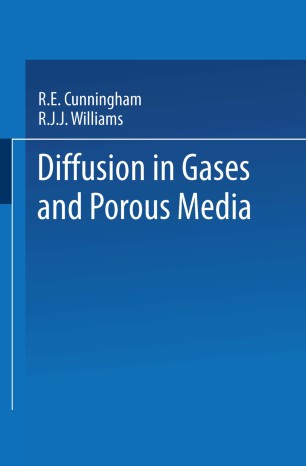 Diffusion in Gases and Porous Media

The world we live in exhibits, on different scales, many phenomena related to the diffusion of gases. Among them are the movement of gases in earth strata, the aeration of soils, the drying of certain materials, some catalytic reactions, purification by adsorption, isotope separation, column chro­ matography, cooling of nuclear reactors, and the permeability of various packing materials. The evolution of the understanding of this subject has not always been straightforward and progressive-there has been much confusion and many doubts and misunderstandings, some of which remain to this day. The main reason for the difficulties in the development of this subject is, we now know, the lack of an understanding of the effects of walls on diffusing systems. Textbooks usually treat diffusion on two levels: at the physicochemi­ cal or molecular level, making use of the kinetic theory of gases (which while a very rigorous and well-founded theory nevertheless is valid only for systems without walls), or at the level of a transport phenomenon, a level geared toward applications. The influence of walls is usually disregarded or is treated very briefly (for example, by taking account of the Knudsen regime or by introducing a transition regime of limited validity) in a way unconnected with previous studies. As a consequence, the extensive, gener­ alized, and well-founded knowledge of systems without walls has often been applied without sound basis to real situations, i.e., to systems with walls.