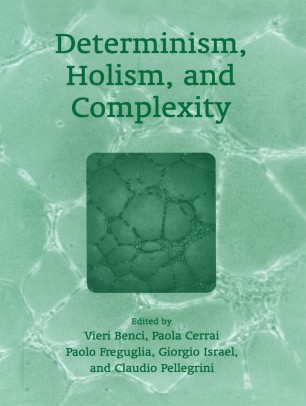 Determinism, holism and complexity: three epistemological attitudes that have easily identifiable historical origins and developments. Galileo believed that it was necessary to "prune the impediments" to extract the mathematical essence of physical phenomena, to identify the math­ ematical structures representing the underlying laws. This Galilean method was the key element in the development of Physics, with its extraordinary successes. Nevertheless the method was later criticized because it led to a view of nature as essentially "simple and orderly", and thus by choosing not to investigate several charac­ teristics considered as an "impediment", several essential aspects of the phenomenon under investigation might be left out. The Galilean point of view also contains an acknowledgement of the central role played by the causal nexus among phenomena. The mechanistic-deterministic de­ scription of reality - for instance, a la Laplace - although acknowledging that it is not possible to predict phenomena exactly owing to unavoid­ able measurement error, is based on the recognition of the their causal nature, even in an ontological sense. Consequently, deterministic predic­ tion became the methodological fulcrum of mathematical physics. But although mechanistic determinism has had and, in many cases, still has, considerable success in Physics, in other branches of science this situa­ tion is much less favourable.