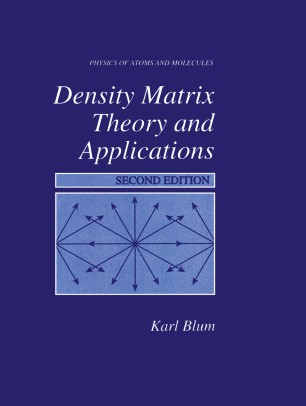 Quantum mechanics has been mostly concerned with those states of systems that are represented by state vectors. In many cases, however, the system of interest is incompletely determined; for example, it may have no more than a certain probability of being in the precisely defined dynamical state characterized by a state vector. Because of this incomplete knowledge, a need for statistical averaging arises in the same sense as in classical physics. The density matrix was introduced by J. von Neumann in 1927 to describe statistical concepts in quantum mechanics. The main virtue of the density matrix is its analytical power in the construction of general formulas and in the proof of general theorems. The evaluation of averages and probabilities of the physical quantities characterizing a given system is extremely cumbersome without the use of density matrix techniques. The representation of quantum mechanical states by density matrices enables the maximum information available on the system to be expressed in a compact manner and hence avoids the introduction of unnecessary variables. The use of density matrix methods also has the advan­ tage of providing a uniform treatment of all quantum mechanical states, whether they are completely or incompletely known. Until recently the use of the density matrix method has been mainly restricted to statistical physics. In recent years, however, the application of the density matrix has been gaining more and more importance in many other fields of physics.