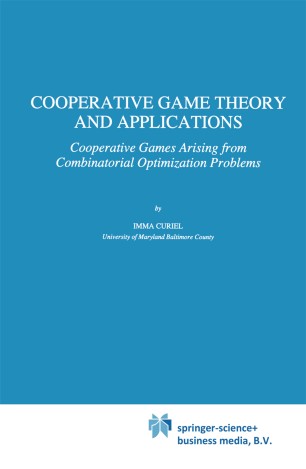 In this book applications of cooperative game theory that arise from combinatorial optimization problems are described. It is well known that the mathematical modeling of various real-world decision-making situations gives rise to combinatorial optimization problems. For situations where more than one decision-maker is involved classical combinatorial optimization theory does not suffice and it is here that cooperative game theory can make an important contribution. If a group of decision-makers decide to undertake a project together in order to increase the total revenue or decrease the total costs, they face two problems. The first one is how to execute the project in an optimal way so as to increase revenue. The second one is how to divide the revenue attained among the participants. It is with this second problem that cooperative game theory can help. The solution concepts from cooperative game theory can be applied to arrive at revenue allocation schemes.
In this book the type of problems described above are examined. Although the choice of topics is application-driven, it also discusses theoretical questions that arise from the situations that are studied.
For all the games described attention will be paid to the appropriateness of several game-theoretic solution concepts in the particular contexts that are considered. The computation complexity of the game-theoretic solution concepts in the situation at hand will also be considered.