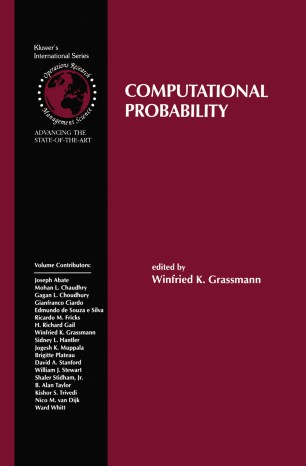 Great advances have been made in recent years in the field of computational probability. In particular, the state of the art - as it relates to queuing systems, stochastic Petri-nets and systems dealing with reliability - has benefited significantly from these advances. The objective of this book is to make these topics accessible to researchers, graduate students, and practitioners. Great care was taken to make the exposition as clear as possible. Every line in the book has been evaluated, and changes have been made whenever it was felt that the initial exposition was not clear enough for the intended readership.
The work of major research scholars in this field comprises the individual chapters of Computational Probability. The first chapter describes, in nonmathematical terms, the challenges in computational probability. Chapter 2 describes the methodologies available for obtaining the transition matrices for Markov chains, with particular emphasis on stochastic Petri-nets. Chapter 3 discusses how to find transient probabilities and transient rewards for these Markov chains. The next two chapters indicate how to find steady-state probabilities for Markov chains with a finite number of states. Both direct and iterative methods are described in Chapter 4. Details of these methods are given in Chapter 5. Chapters 6 and 7 deal with infinite-state Markov chains, which occur frequently in queueing, because there are times one does not want to set a bound for all queues. Chapter 8 deals with transforms, in particular Laplace transforms. The work of Ward Whitt and his collaborators, who have recently developed a number of numerical methods for Laplace transform inversions, is emphasized in this chapter. Finally, if one wants to optimize a system, one way to do the optimization is through Markov decision making, described in Chapter 9. Markov modeling has found applications in many areas, three of which are described in detail: Chapter 10 analyzes discrete-time queues, Chapter 11 describes networks of queues, and Chapter 12 deals with reliability theory.